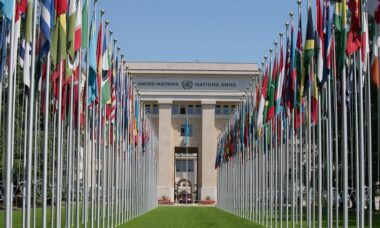 Government and industry representatives from around the world met in Geneva last week to hear about the “significant economic opportunities” offered by industrial hemp and the need for greater clarity on its legal status.

The gathering, organised by the United Nations Conference on Trade and Development (UNCTAD), followed the late-November release of a UNCTAD report on industrial hemp aimed at highlighting the opportunities the sector can offer to developing countries.

“The growing hemp market offers significant economic opportunities that all countries can capitalise on,” said co-author Marco Fugazza, an economist with the UNCTAD. “As a renewable product, the opportunities are sustainable. This is extremely important as countries try to boost their economies while protecting the environment.”

The “Commodities at a glance: Special issue on industrial hemp” report, the UNCTAD said, provided the background information for the workshop held at the Palais des Nations on 18th January.

Based on the report, 40 countries produced around 275,000 tonnes of raw or semi-processed industrial hemp in 2019, the last year for which data was available, but four of them accounted for over half of the total, China being the most productive before France, Canada and the US.

According to the authors, though, the hemp industry, if boosted, could benefit the economies of developing countries.

“Evolving legislations at the national, regional and international levels may provide new market and new product opportunities for agricultural producers around the world, and particularly in developing countries, including commodity-dependent developing countries,” the report reads.

The report’s authors set the current global amount of hemp exports and imports at $42m, which they say represents a very low trade figure, due to stigma and the fact that only a limited number of cannabis products are covered by statistics.

However, the authors say that this low figure offers great opportunities for the industry to grow globally.

“Because of its versatility and its functional characteristics,” the report reads, “the industrial hemp market holds vast potential in agriculture, textiles, recycling, automotive, furniture, food and beverages, paper, construction materials, and personal care.”

Lorenza Romanese, managing director of the European Industrial Hemp Association (EIHA), who was among the contributors to the report and travelled to Geneva for the workshop, told CannIntelligence that this was the first collaboration between the Brussels-based organisation and a UN body.

“The most important part of this workshop is that it’s not over,” she said. “UNCTAD is willing to organise more meetings, with a focus on developing countries.”

Representatives from several countries in both North and Sub-Saharan Africa, as well as Southeast Asia, took part in the workshop along with delegates from the European Commission’s Directorate-General for Agriculture and Rural Development, the US Federation of International Hemp Organizations, the Latin America Industrial Hemp Association and industrial hemp associations in South Africa, Malaysia, Morocco and Europe.

“There is a big appetite worldwide,” Romanese told CannIntelligence. “But we need to co-operate and share the knowledge. It’s not about getting the biggest slice of the cake, but about baking a bigger cake.”

Even in world regions and countries where the cannabis industry is well-developed, Romanese said, the hemp cake is still tiny.

“In Europe we have a hemp-cultivated surface of only 50,000 ha,” she said. “It’s not enough and we need to do our homework to begin with, which is to increase the surface.”

Romanese said that one of the obstacles standing in the way of developing countries willing to grow their own cannabis industry is the lack of seeds, as farmers are allowed to sell the flowers of cannabis plants in only a few countries.

“We talk so much about the lack of resources and then, when it comes to hemp, we can use the fibre but not the seeds,” she said. “This is not logical. There is a lack of seeds, and if a country wants to start hemp production, where will they find them?”

Hemp farmers, Romanese said, should be supported and allowed to sell the flowers of their crops.

According to the report’s authors, a “whole-plant” approach is crucial for the industry to benefit from the full potential of cannabis production. “A so-called whole-plant approach based on the exploitation of all parts of the plant should be at the core of any sectoral development strategy,” the report reads. “This approach could facilitate the creation of production chains that are able to contribute to growth in rural areas, in manufacturing, and in the food processing industry.”

Another crucial point for the development of a local hemp industry, the report says, is the clarification of the legal status of cannabis. “To fully exploit the potential of industrial hemp, countries would need to take specific actions,” the authors wrote. “For instance, a clarification of the legal status of hemp as distinct from intoxicant cannabis substances could be the first step taken by governments.”