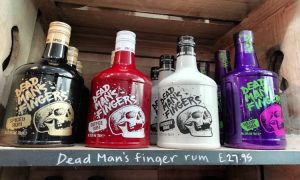 Companies can advertise food and drinks as containing CBD, but really these will only be minimal amounts naturally occurring in hemp food items such as seeds. These trace amounts can still be promoted but companies should be careful about implying any link to illicit drugs like cannabis, according to the UK Advertising Standards Authority (ASA).

The ASA recently made a ruling on a rum from the Cornish Rum Company claiming to contain CBD. It said: “The advertised product contained hemp and CBD which the ASA understood might, in certain forms and under certain circumstances, be allowed by legislation to be included in foods and drinks.”

However, the ASA was not able to give any further guidance on what forms and under which circumstances this would be permitted. A spokesperson for the ASA told CBD-Intel that the organisation, which acts as a press regulator in the UK, could only point to previous guidance from the Committees of Advertising Practice (CAP) that had been updated to reflect the change in status for cannabinoids under novel food guidance.

In the case of the Cornish Rum Company’s Dead Man’s Fingers rum, only hemp seeds were used. This meant that the product could be advertised as it did not contain a cannabinoid extract that would be considered a novel food ingredient.

“The ads included references to the product containing hemp … and CBD … and we considered that simple factual statements about that content would not necessarily be considered irresponsible,” the ASA said.

However, the ASA still took issue with how the company chose to advertise its product. The series of ads used terminology usually associated with cannabis, such as a play on the word joint to potentially imply both a place to have a drink and a cannabis product.

The Cornish Rum Company said the use of the term joint was only “as a slang term for a place or establishment and was used in ad (a) to refer to a local bar, pub or retail outlet where consumers could purchase Dead Man’s Fingers rum,” and implied that any other associations were only in the perceiver’s decadent mind.

The ASA was sceptical of this and said the use of the word “joint” – as well as other double-entendre cannabis words such as “munchies” and “dealer” – all implied a connection to illicit drug culture, which alcohol products cannot make. Further imagery of leaves and a suggestively shaped cigarette would further enhance this.

“The skull … was also smoking a cigarette, and, because of the cigarette’s shape, we considered it would be understood by consumers to contain cannabis. In the context of each ad, we considered the reference to ‘a joint’ …  would be interpreted as a cannabis containing cigarette and ‘munchies’ … as a reference to a slang term for the hunger felt after smoking cannabis,” the ASA said.

It took further issue with statements it felt implied the product could impact on a user’s mood – prohibited for alcohol products and also potentially a health claim for CBD. This included the phrases “chilled, man” and “blow your mind”. Such phrases would be considered as implying the product could change someone’s behaviour or mood, the ASA said. It upheld complaints against the ads and said they should not appear again – though it did rule in favour of the rum company on a third challenge querying whether the advertising would be likely to particularly appeal to people under the age of 18.

The Cornish Rum Company did not discuss specifics of the issue with CBD-Intel; however, it does not appear to have affected the company’s initial success very much. It said it had secured grocery listings with both Sainsbury’s and Asda. Together, the two UK grocery chains will list the rum in 520 stores for an initial limited period.

What this means: It seems perverse that companies can advertise a product as “containing CBD” when really it only has minute traces of the cannabinoid, yet that does not appear to be a concern for the ASA.

Not using cannabis/stoner imagery in hemp-related products is also not exactly going to be the most earth-shattering piece of advice – though given the number of brands throughout the CBD space continuing to do so – it may be one that many have failed to take.